A private member’s bill pushing to legislate the “right to repair” consumer products has generated interest from manufacturers, repair companies, and consumer groups.

Bill C-244, An Act to amend the Copyright Act (diagnosis, maintenance and repair) was introduced by Liberal MP Wilson Miao in February 2022. The bill is currently before the House industry (INDU) committee.

What the bill proposes

Upon the bill’s introduction on Feb. 8, Miao said that the proposed legislation is based on the concept that “when an individual makes a purchase of an item, the owner should have a right to repair it and not be restricted by the manufacturer.”

C-244 also proposes to include “computer program” in the definition of a technological protection measure under section 41(a) of the act.

A list of organizations on the federal lobbyists’ registry that are interested in discussing Bill C-244, or the right to repair, more generally.

What advocates are saying about…

David Adams, president and CEO of Global Automakers of Canada, told INDU on Oct. 31 that the organization has serious concerns that C-244 “exposes vehicles to the prospect of theft, hacking, and compromised vehicle safety and emissions standards… how would a consumer, the manufacturer or, potentially, the courts know who had circumvented the [technological protection measures] and for what reasons?”

The National Marine Manufacturers Association, representing boat, marine engine and accessory manufacturers, warned of potential tampering with software that regulates safety, security, and emissions requirements in a written submission to INDU on Oct. 28. “The potential for aftermarket modifications by untrained individuals adds another layer of risk and could lead to claims against the original equipment manufacturers,” the association stated.

Medtech Canada, which represents medical device companies, warned that current wording in the bill would give unregulated and untrained service providers access to medical technology software. Raj Malik, Medtech’s vice-president of federal affairs and national strategic partnerships, asked that INDU create a specific exemption for medical devices and technologies regulated for sale by Health Canada in the bill during a meeting on Nov. 14.

John Schmeiser, president of the North American Equipment Dealers Association (NAEDA), told INDU on Nov. 14 that the association has already “stepped up to support a customer’s right to repair,” and that the bill is unnecessary in his industry. He said 98 per cent of equipment repairs can be performed by farmers or third-party repair shops, while the remaining two per cent require access to safety or emissions criteria, or a software reset.

David Adams of the Global Automakers of Canada said members, including Honda and Toyota, were committed to right-to-repair principles through the Canadian Automotive Service Information Standard (CASIS), a voluntary agreement signed by Canadian automakers in September 2009. Under the agreement, manufacturers must provide service information, training tools, and equipment to the secondary repair market, or the aftermarket, so any qualified mechanic can repair a vehicle.

The Canadian Vehicle Manufacturers’ Association (CMVA), which represents Ford Motor Company of Canada, Limited, General Motors of Canada Company, and Stellantis (FCA Canada Inc.), also remains committed to the CASIS model. Brian Kingston, president and CEO of the CVMA, said the agreement “has been working for over a decade and may serve as a model for other industries to adopt.”

But LKQ Corporation, which distributes original equipment manufacturer and auto aftermarket replacement parts, argues that CASIS did not factor in technological advances.

“When these agreements were signed, in order to access vehicle data, a computer needed to be plugged into a car,” said Tyler Blake Threadgill, the company’s vice-president of government relations, during an INDU meeting on Nov. 14. “Now, vehicle data is sent through a telematic system that transmits data wirelessly to a server managed by the manufacturer, a process that was not around when these agreements were signed.”

Ian Jack, vice-president of public affairs at the Canadian Automobile Association (CAA), told INDU on Nov. 14 that the association supports the bill’s attempt to address a potential barrier to repairability. He said that the bill ensures “technological neutrality” and would allow Canadians to take their vehicles to a garage of their choice, including independent shops, to be repaired without an “electronic padlock.”

The Automotive Industries Association of Canada (AIA Canada), which represents the auto aftermarket industry, suggested amendments to strengthen the bill. Alana Baker, AIA’s senior director of government relations, told INDU on Oct. 31 that any right to repair legislation should clearly remove manufacturers’ ability “to prevent independent shops from obtaining diagnostic repair or maintenance information for the purposes of legitimate repair.”

Parliamentarians with an interest in Bill C-252 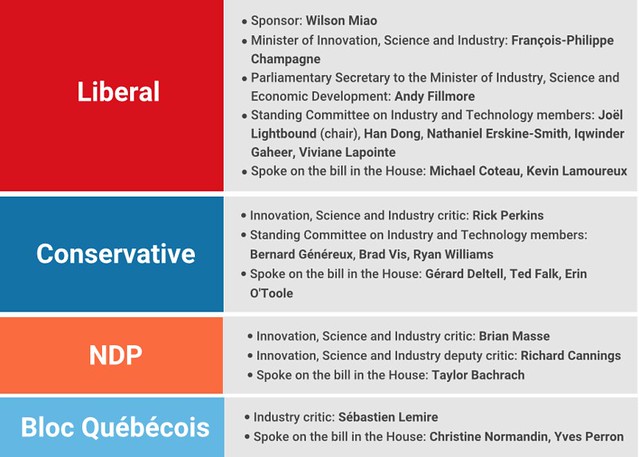 A history of the bill

Bill C-244 is identical to Bill C-272, introduced by Liberal MP Bryan May in the 43rd Parliament. The House unanimously passed C-272 at second reading on June 2, 2021, and referred it to the industry committee. The committee held one meeting on the bill on June 22, 2021, during which May appeared as a witness, but it died on the order paper when the 2021 federal election was called.

Bill C-244 was introduced in the House of Commons on Feb. 8, 2022, by Liberal MP Miao, who said that the bill is  “critical to the protection of Canadian consumers and our environment.”

As with C-272, C-244 passed the House unanimously at second reading on Oct. 5. During a second reading debate on April 8, Gérard Deltell, who was the Conservative innovation critic at the time, said his party agrees with the principle of the bill. “We are also aware of the impact the bill will have on industry, on how things are done and on local businesses, and we must consider that,” he said in French.

NDP innovation critic Brian Masse said that his party also supported the bill going to committee on April 8. Masse has previously introduced private member’s bills on the right to repair in the automotive aftermarket. He said CASIS was “decent, but it has some issues,” especially since some electric car manufacturers such as Tesla and Rivian have not signed the agreement.

“In one situation, simply updating a computer would stop a car from being fixed at an aftermarket garage, such as Canadian Tire or somewhere else. It would have to be towed to another location to get a simple adjustment to make it a working vehicle,” Masse said during the April 8 debate.

Bloc Québécois deputy House leader Christine Normandin said in French during the April 8 debate that the bill could have an impact on “planned obsolescence,” a manufacturing practice that deliberately shortens the lifespan of a product and pushes the consumer to purchase a replacement item.

SEE A SAMPLE
READY TO SUBSCRIBE?
Lobby Monitor Subscribers receive:
These key people read the Lobby Monitor and make decisions that could affect your business:
For more information about The Lobby Monitor, click here or call 613.688.8822.

Inside The Lobby Monitor